Results of the 2018 Senior Championship

COGGIN on the OGGIN for first Seniors Win

On a lovely sunny day,with perfect golfing conditions,former East Riding stalwart and home favourite Jonathan Coggin won the ERUGC Seniors Championship for the first time with a commendable score of 3 over par 73.

This year the East Riding Union of Golf Clubs made one or two changes for most of our events to try and increase the number of entrants. Last years Seniors Competition at Flamborough only produced 47 entries of which only 40 played on the day. In 2018 at Hull GC the main difference was to reduce the senior qualification age down from 55 to 50, and this along with the more central location of the event, enabled a field of nearly 90 players from a potential 94 entrants.

The runners up for the Championship were Richard Norton from Beverley, who plays off a scratch handicap but losing out on the back 9 to Eddie Loyden of Boothferry playing off 6 - both carded 75 and therefor Eddie taking the Category A title (age 50-59) this was a sterling effort by Eddie as he started with a 7 on the first!

In Category C (70+) another former winner, of the Championship, Brian Witty won this with a very respectable 79 . (breaking 80 off back tees for a 75 year old is amazing ?!!) followed by nett prizes in this category from Mike Jones (1st) of Hull GC and Peter Blenkinsop (2nd) of Cottingham, completing the prize winners

At the Presentation Jonathon Coggin thanked the organisers etc and also mentioned that it was also great to win the Trophy that his father Brian Coggin had previously won 26 years ago in 1992.

Congratulations to Jonathan Coggin and all the other prize winners. 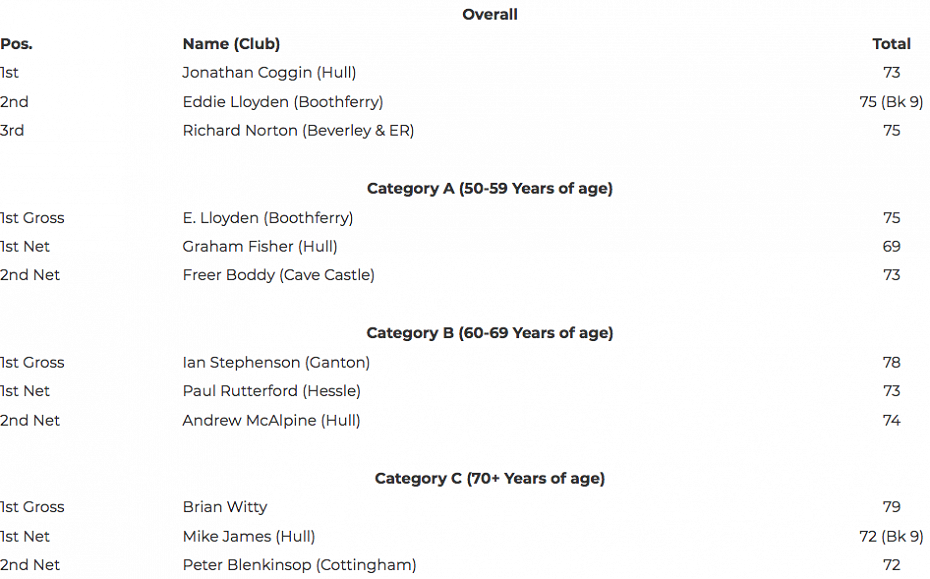