Under 18s Finish Runners Up after great year 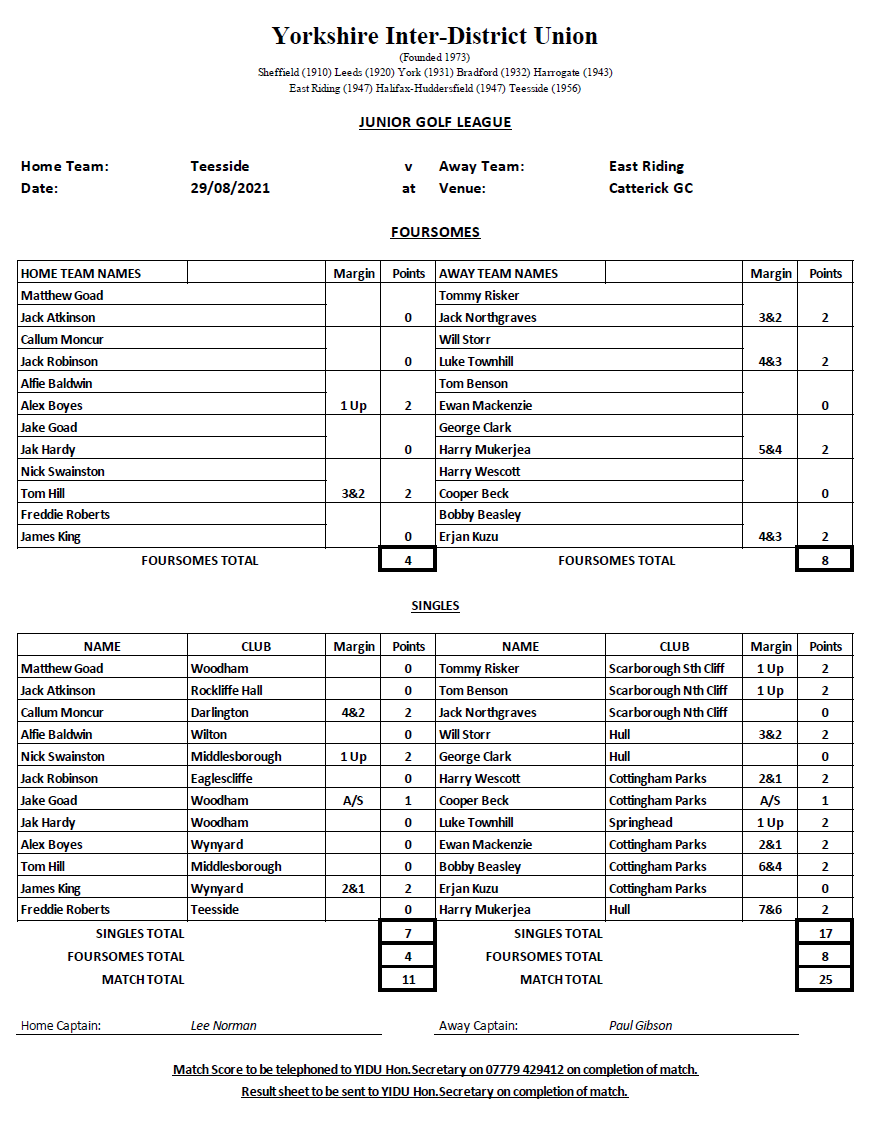 The u18's travelled to Catterick GC in Teesside to play their last game of a hugely successful season.  The match was a dead rubber, with the league already decided, but pride was high on the agenda along with the chance to blood new players in preparation for next season

The more experienced players were split up to give guidance and support to the new members and it gave the East Riding chance to experiment with some pairings for next year.  The new pairings worked out extremely well with the East Riding taking an 8-4 lead into lunch with comfortable victories from Luke Townhill (playing high up the order and in only his 2nd game), Harry Mukerjea (debutant) and Bobby Beasley and Erjan Kuzu in the anchor match

The singles got off to the best possible start with experienced campaigners Tommy Risker and Tom Benson both claiming 2 points apiece to put East Riding in touch of victory.  A small middle order wobble left the lower order to shine with the East Riding taking 11 from a possible 14 points. Luke Townhill, Ewan Mackenzie, Bobby Beasley and Harry Mukerjea all claiming wins which will stand them in good stead for next year.  East Riding running out victors by a score of 25-11

It serves as a fitting send off to those who are leaving the u18's set up this year with Captain George Clark, Tom Benson, Jacob Hodgson, Will Storr, Harry Rogers, Harry Anderson and Marcus Moore who have all contributed.  Not only have they contributed points on the course, but have served as great ambassadors to the East Riding and to their fellow u18's.

In the player of the year competition, Captain George Clark just beat Will Storr by a solitary point.  3rd place went to Tommy Risker.

Under 18s Team team bounce back at Cottingham 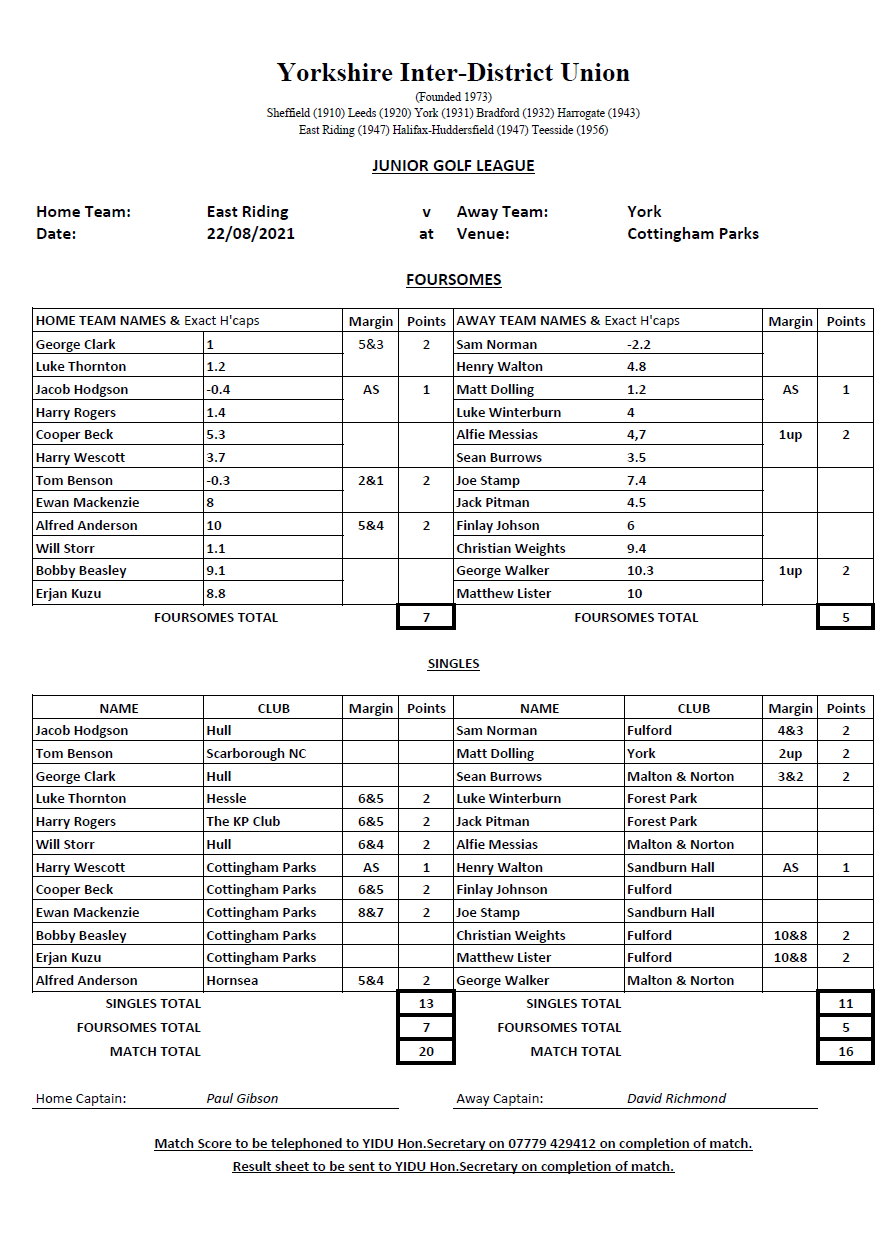 The East Riding u18's went into their penultimate match against York just days after the disappointing loss to Leeds. Changes were made to rest key players with the upcoming 6-man team event just around the corner.  This gave valuable playing time to future members of the team.

The morning foursomes fell the way of the East Riding by 7 points to 5 thanks to some great golf from experienced campaigners Luke Thornton, George Clark, Tom Benson and Will Storr.  A special mention to Tom and Will as they shared their vast experience with Ewan Mackenzie and debutant Alfred Anderson.

In the afternoon singles York, on paper, York got off to a fast start by winning the first 3 matches.  However, such was the margin of victory for the East Riding in matches 4-9 they were off the course before the first 3.  6-hole victories from Luke Thornton, Harry Rogers, Will Storr and Cooper Beck sealed the victory before Ewan Mackenzie (8&7) and Alfred Anderson (5&4) put the icing on the cake

In the player of the year, Captain George Clark maintains his grip on the title, but the gap has closed slightly.  Only Will Storr can catch him as Luke Thornton will be away for the East Riding final match against Teesside at Catterick

Heartbreak at Darrington for Under 18s Team 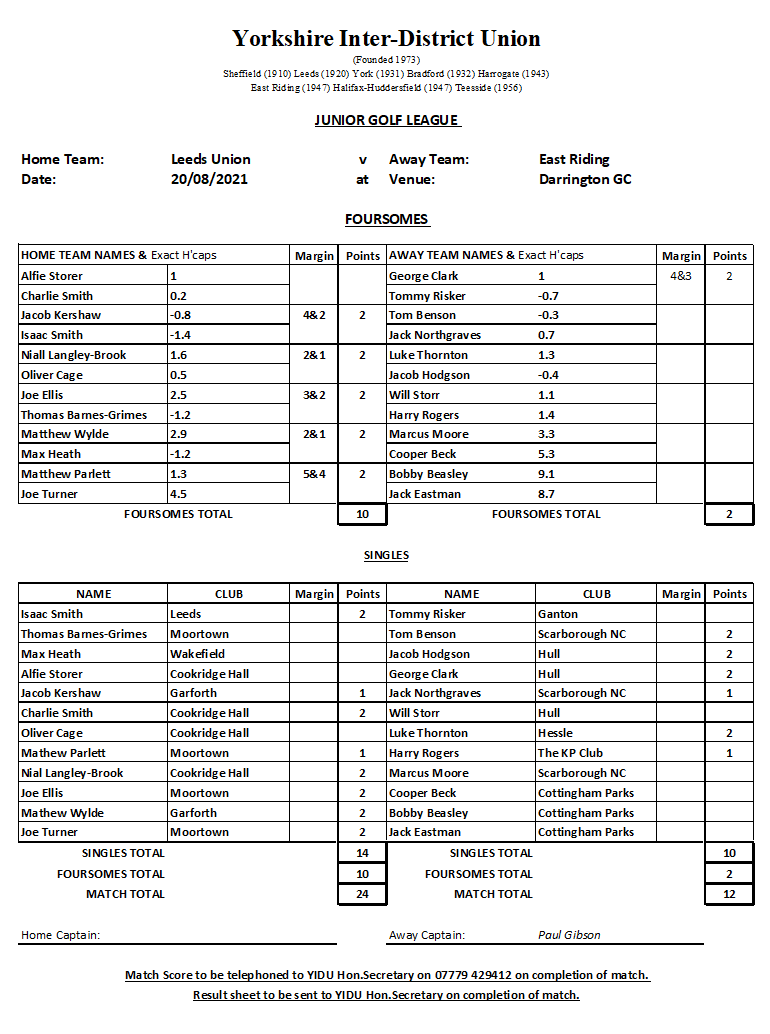 The East Riding u18's team travelled to Darrington Golf Club in the Leeds Union for their 5th match of the season.  As it stood before the match, Leeds were the league leaders having won all 6 of their matches.  The East Riding, having played 4 and won 4 were the only realistic challengers to Leeds, which would effectively make this a championship decider.

The East Riding got off to the best possible start with a victory in the top foursomes match with Captain George Clark and Tommy Risker bring home the first points of the day with a 4&3 victory.  That would prove to be the East Ridings only points of a disappointing morning with the Leeds Union taking a 10-2 lead into lunch.

A mountain needed to be climbed in the afternoon with the 'Miracle at Mid-Yorkshire' touted about.  The East Riding gained momentum early on with 3 wins in the first 4 matches but the momentum stalled with a couple of losses and a half.  This put Leeds on the verge of the victory, but a couple more wins from the East Riding asked a question of the Leeds team.  Sadly for the East Riding it was not to be as they fell to a 24-12 loss and end their hopes of lifting the Yorkshire Inter-district League.

In the player of the year competition, Captain George Clark is leading from the front and with changes expected for the more senior players it looks like it is Georges to lose.  He has a 4-point lead over Tommy Risker and a 6-point lead over Tom Benson. 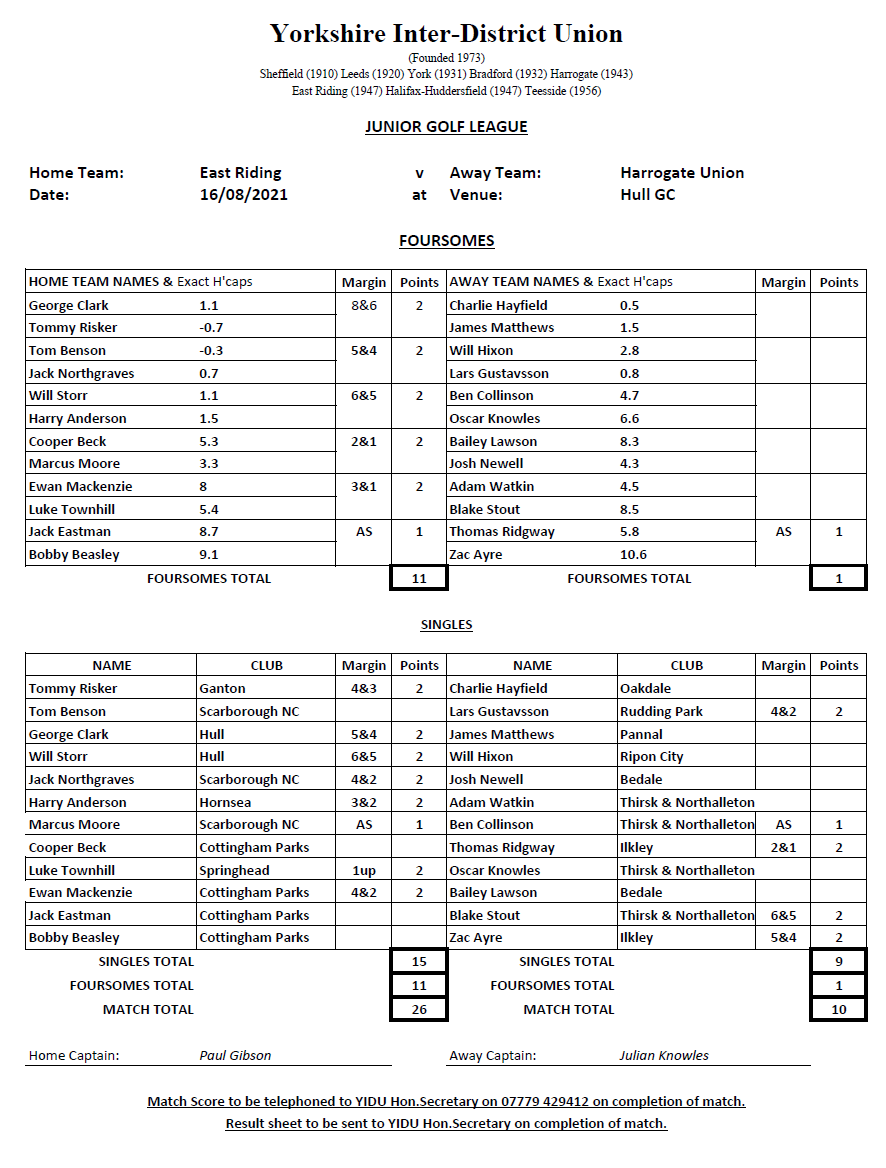 The East Riding u18's stayed at home for their 4th match of the season versus the Harrogate Union. Hull Golf Club was the venue for what could prove a potential banana skin if the team did not perform well.

Spirits were high in the camp after a great victory last time out v Sheffield and the u18's wasted no time in continuing their good form with a dominant display in the morning foursomes. An undefeated morning session gave the East Riding and 11-1 lead

Once again, the top half of the order performed extremely well, combined with useful points further down from debutant Luke Townhill and Ewan Mackenzie playing only his 2nd game.

This puts the East Riding in a great position to challenge for top spot in the Yorkshire Inter -District league. A match vs top of the table Leeds at Darrington on Friday will have a huge say in who claims top spot this year

With Luke Thornton away on Yorkshire duty the chasing pack took full advantage of his absence. Tommy Risker, George Clark, Will Storr, Jack Northgraves and Tom Benson are now all ahead of him.

Three in a row for the Under 18s 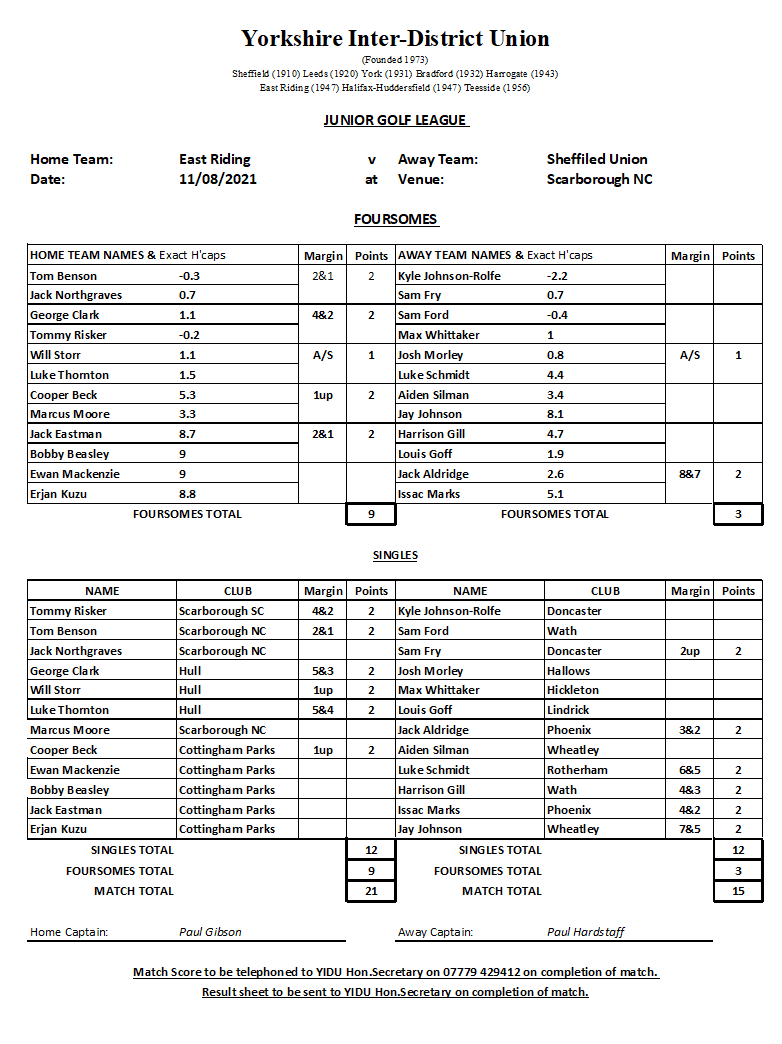 After a close match v Bradford last week, the u18's were looking to continue their fine start to the season with their 3rd fixture against Sheffield Union

The East Riding selected an inexperienced line up with half the team having played 3 matches or less. A handicap difference of 18 shots in favour of Sheffield meant that home advantage would be of huge benefit

The East Riding decided to top load the foursomes playing their strongest players together, whilst Sheffield chose to split their stronger players up.  This proved to be a good decision as the East Riding claimed 9 of the 12 points available.  Great wins for home players Tom Benson & Jack Northgraves and Captain George Clark & Tommy Risker got the u18's off to a great start.  A further 3 points were claimed from losing positions in the matches involving Luke Thornton & Will Storr and Cooper Beck and Marcus Moore. Then, to top of a great morning a win from Bobby Beasley and Jack Eastman gave the East Riding a better-than-expected morning.

The East Riding knew that the job was only half done and the Sheffield team would still fancy their chances in the afternoon singles.  Leading from the front were the familiar names of Tommy Risker, Tom Benson, George Clark, Will Storr and Luke Thornton claiming their matches to give The East Riding the 10 points they need to secure victory.

It was a superb all-round performance from the team and with valuable experienced gained for the newer players, spirits are high in the camp for the remained of the season.

Luke Thornton is now just 1 point ahead of Tommy Risker, Tom Benson and George Clark in the race to be named player of the year.  Luke is playing for Yorkshire when the East Riding play their next match on Monday 16th August, so the others will see this as a great chance to get ahead. 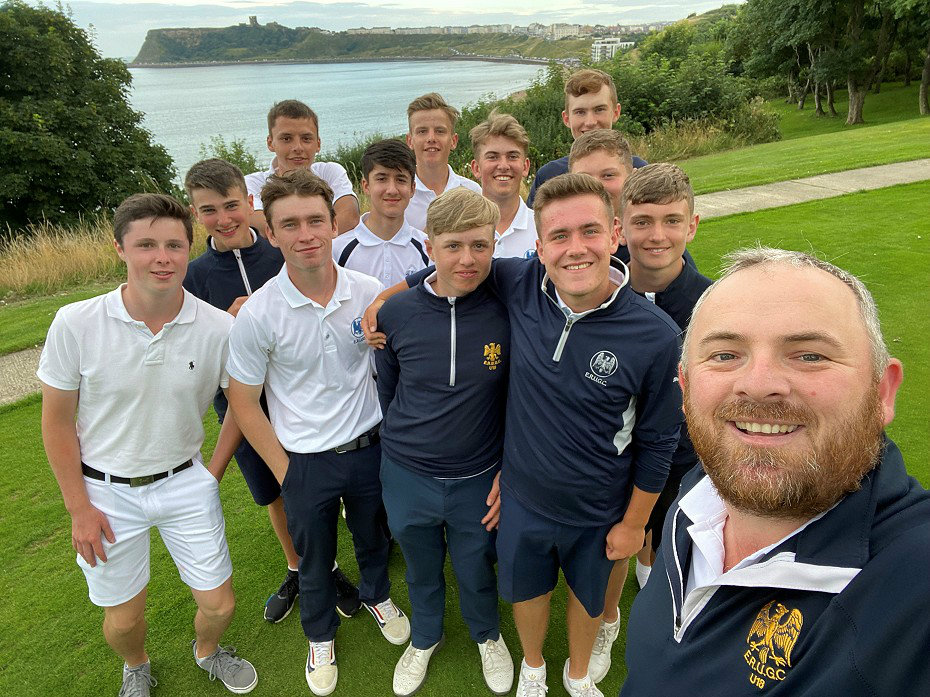 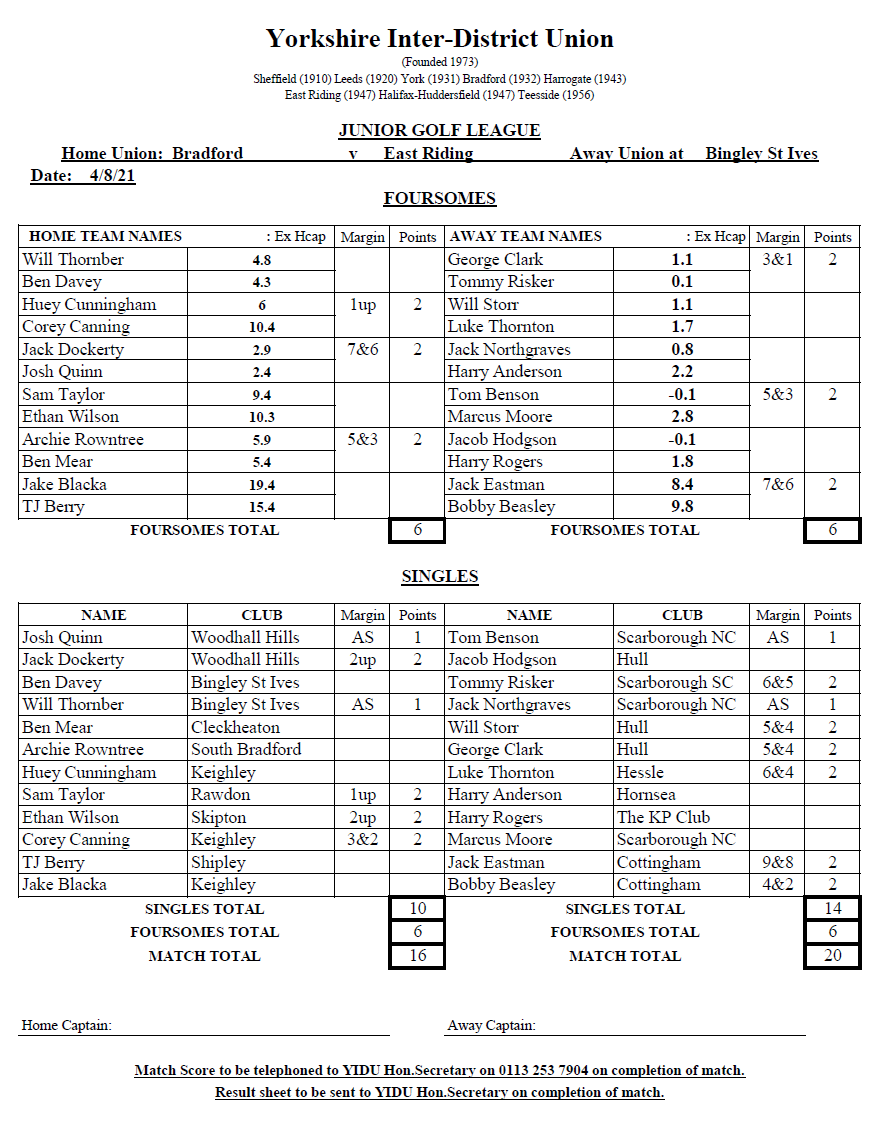 The u18's finally played their long awaited second game of the season at the fantastic Bingley St Ives Golf Club versus the Bradford Union.  On paper, the East Riding had a very strong team and where clear favourites for the match.

All looked to be going to form when Captain George Clark and Tommy Risker claimed the first points of the day with a 3&1 victory at the top of the order.  Bradford hit back with two matches of their own, with a great win from being 5 down after 9 to winning 1up thanks to an incredible chip in at the last.

The next two games saw a win for each team and thanks to Bobby Beasley and debutant Jack Eastman who claim the final foresomes match meant the honours were even at 6-6 at lunch.

Into the afternoon and the contest ebbed and flowed between the two teams with the East Riding taking 4 matches out of the first 6 thanks to wins from Tommy Risker, George Clark, Will Storr and Luke Thornton.  Back came Bradford with 3 wins of their own leaving the match on a knife edge.  A resounding 9&8 win from Jack Eastman put the East Riding on the verge of victory.  It still needed at least a half from Bobby Beasley in match number 12 to claim outright victory, which he duly delivered with a 3&2 win

This will not go down as one of the Unions greatest victories, but great teams will find a way to win, even when not playing well.  A tough fixture against leagues leaders Sheffield at Scarborough North Cliff is our next fixture on Wednesday 11th August

After 2 matches Luke Thornton leads the player of the year contest by 2 points from Marcus Moore, Tom Benson, Tommy Risker and George Clark.

First game, first win for the Under 18s 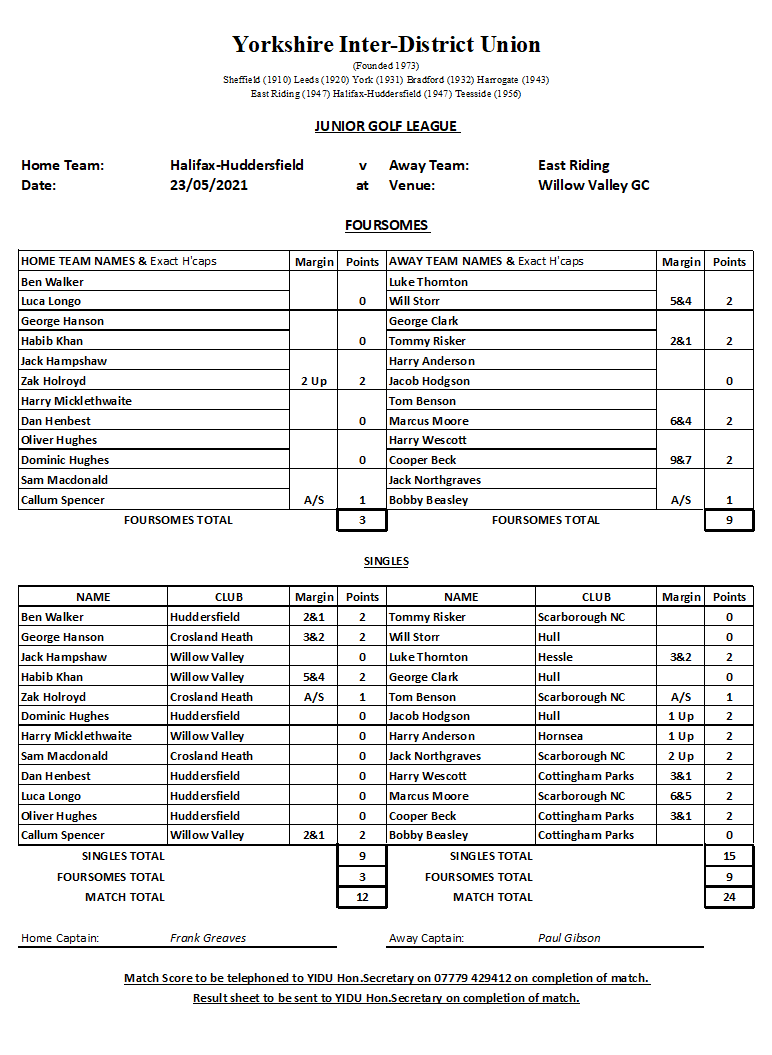 18 months has passed since our last YIDU league fixture, so the u18's were raring to go for our first fixture again Halifax and Huddersfield at Willow Valley Golf Club.

Fielding a strong team we got off to the best possible start with Luke Thornton & Will Storr bring home the first points with a 5&4 victory from the head of the field. More points would follow from Captain George Clark and Tommy Risker before our 3 debutants, Cooper Beck, Marcus Moore and Bobby Beasley all contributed to a 9-3 lead for the East Riding.

Into the singles and the Halifax and Huddersfield team were in no mood to roll over as they shot out of the blocks to take 7 out of the first 10 points.  Halifax and Huddersfield were right back in the match and with the next 3 games all going down the 18th the match could swing either way.  Jacob Hodgson, Harry Anderson and Jack Northgraves experience from previous years shone through as they all claimed valuable 2 points each to put the East Riding on the cusp of victory.

Cooper Beck and Marcus Moore followed their great form in the foursome to record 3&1 and 6&4 victories to put the East Riding over the line for a 24-12 victory...a great start to the season

Thank you to John Illingworth, Peter Robertson and Chris Clarkson for their support during the day, but a special thank you to Steve Thornton for his continued support and enthusiasm for our u18's team.