Congratulations to Harrogate Union on winning the 2019 YIDU Under 18s League! 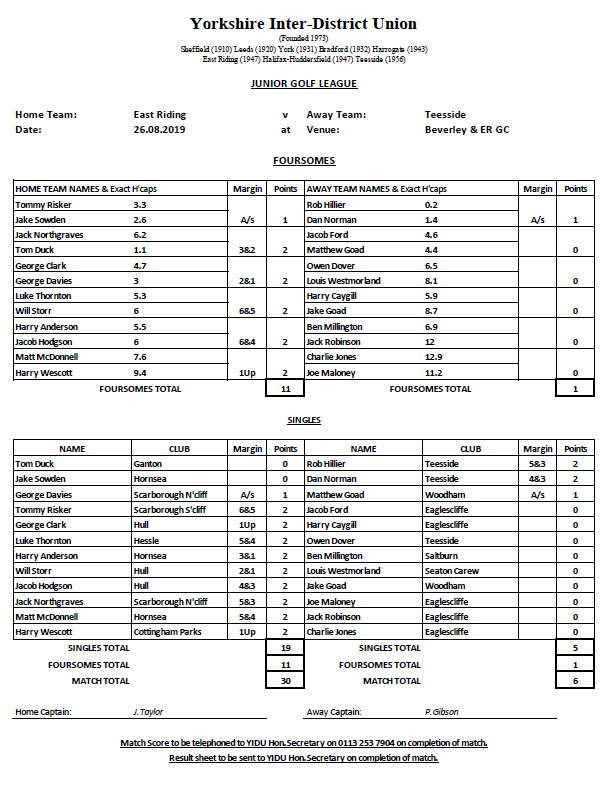 The East Riding u18's headed to Beverley and East Riding Golf Club for their final league match of the season looking for a strong finish against Teesside.  Much like the match against Bradford, the day was sweltering with temperatures reaching 30 degrees and on a hilly course like Beverley, keeping hydrated was going to be key.

The morning foursomes could not have gone much better for the East Riding team with tried and tested pairings doing the job with comfortable victories.  An 11-1 lead going into lunch meant it was our match to loose.

Our foursomes performances have improved over the course of the year and this set the basis for a relatively comfortable afternoon singles.  Early losses at the top of the order were quickly offset by victories in the final 9 matches giving the East Riding a 30-6 victory.

All eyes then turned to the Player of the Year competition Tommy Risker held a 2 point lead over Captain Tom Duck, but with 4 other players just in the mix, the trophy was up for grabs.  Tommy was in outstanding form again as a half in the top foursomes match and a comfortable victory in the singles giving him a 3 point victory.  2nd place went to Will Storr and 3rd place to Matt McDonnell.

The team have made great strides since the first 2 games with lots of handicap reductions and with only 1 person leaving the team from todays match the future looks very bright for this East Riding team.  Thanks must go to all the players that have represented the East Riding this and in previous years, all the volunteers who kindly give up their time to help with organising and running the fixtures and to the parents who ferry their golfers around...none of it would be possible with out you. 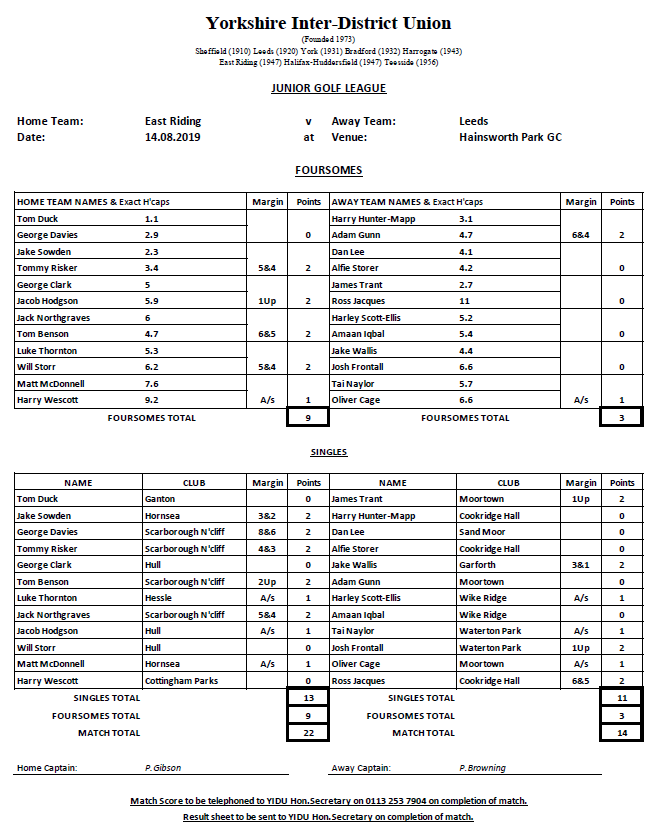 The East Riding u18's moved their winning streak on to 4 with a hard fought victory over a strong Leeds team at Hainsworth Park.

The East Riding made just one change from their last outing with Jake Sowden coming in to replace Jack Maxey, so keeping the spine that won so convincingly last time out.

At one point during the morning foursomes it looked like finishing 6 points apiece with George Clark and Jacob Hodgson along with Harry Wescott and Matt McDonnell 2 down with 4 to play and 4 down with 5 to play respectively.  George and Jacob won 3 out of the last 4 to claim 2 points, but perhaps more importantly Harry and Matt battled to a half to give the East Riding a 9-3 lead at lunch.

The momentum was certainly with the East Riding as they won 3 out of the top 4 games with victories from George Davies, Jake Sowden and Tommy Risker to put the East Riding in touch distance of another win.  After the impressive Jack Northgraves won his match 5&4 it was left to Tom Benson to roll in a 45 foot putt on his final hole to record a 2up victory.  His victory ensure the East Riding won for the forth time in a row and remain on course for a strong finish to the season

In the Player of the Year competition it is all change at the top as Captain Tom Duck uncharacteristicly failed to take any points which opened the door to his challengers.  Early season leader Will Storr collected 2 points for the match to close the gap, but the big winner of the day was Tommy Risker.  2 victories meant 6 points and top spot over Tom and Will.  Unfortunatley Tom Benson(who scored 6 points in the match) will miss the last match of the season meaning Tommy, Tom and Will will battle it out for this years Player of the Year. 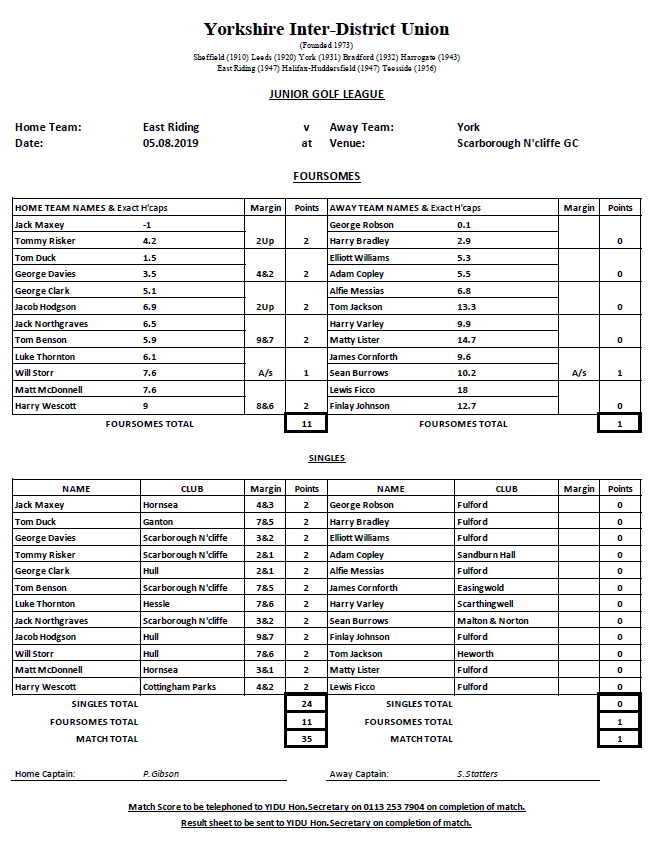 The East Riding u18's team headed to Scarborough North Cliff for their 5th match of the season high in confidence after victories in their last to matches against Sheffield and Bradford respectivelty.  York fielded a weaker team than in previous matches meaning the East Riding team had to guard against complacency to get the victory.

The morning foursomes could not have gone much better for the East Riding as they claimed victory in 5 of the 6 matches with Tom Benson and debutant Jack Northgraves leading the way with a resounding 9&7 victory.

Into the afternoon singles and the East Riding refused to take their foot off the gas and pushed hard to improve the 'hole difference' that could affect where we finish in the final league table.  In the end The East Riding claimed victory in all the singles matches to score an emphatic 35-1 victory.

With such a resounding win not much has changed in the Player of the Year competition. Captain Tom Duck still leads the way, but has extended his lead a further point to 4 over Will Storr and Tommy Risker.  Matt McDonnell, Tom Benson and George Clark still remain in the hunt, but have work to do.

Although the league looks out of reach for this season, the team remains in good health with 10 of of the 12 players who played today being available to play next year.

The East Riding u18's team played their 4th match of the year at Woodhall Hills Golf Club against the Bradford Union on the hottest day of the year.  Bradford fielded an inexperienced team, but nothing was taken for granted by the East Riding golfers.

The team got off to the best possible start with the top 3 foursomes matches going the way of the East Riding. Pick of the bunch were the experienced pairing of Captain Tom Duck and Hull's Charlie Milner winning 5&4, closely followed by Hornsea's Jake Sowden and Scarborough NC's Tommy Risker who ran out 4&3 victors.  Bradford won the next match, but the rest of the foursome matches were claimed by the East Riding give us a 10-2 lead going into lunch.

Once again Captain Tom Duck led from the front in the singles with a 3&2 victory closely followed by Jake Sowden and Charlie Milner to put East Riding on the brink of their 2nd win of the year.  Bradford took 5 points from a possible 6 to put the East Riding under a little bit of pressure. Debutantes Lloyd Bean and Harry Wescott along with Luke Thornton, Harry Anderson and Matt McDonnell saw the East Riding home with victories.

We now move into the 2nd half of the season and with 3 home matches left we look forward to a strong finish to the season. 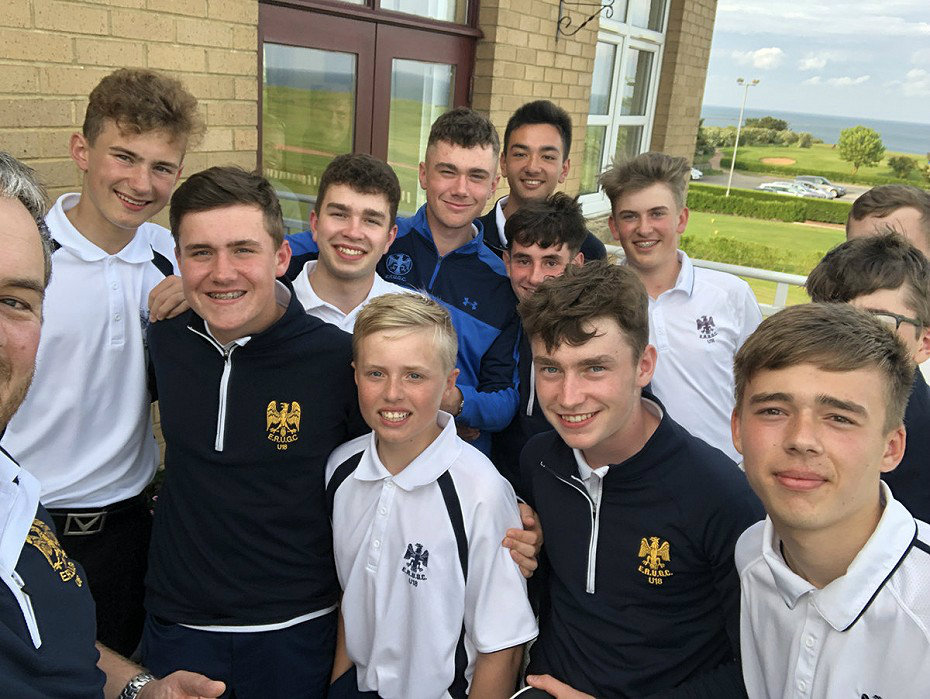 Our first home match of the season took place at Filey Golf Club and we were eager to get our first win under our belts against Sheffield Union.

A great morning Foursomes saw the East Riding race into a 10-2 lead with great victories from Jack Maxey and Tommy Risker (5&4), Brendan Wright and Kye Steventon(4&3), George Clark and Matt McDonnell (1up), Harry Anderson and Tom Benson(7&5) and Luke Thornton and Will Storr(2&1) put us in a strong position.

Into the afternoon and Jack Maxey and Captain Tom Duck led the line very well with 4&2 and 4&3 victories to put us in touching distance of our first win.  Although we only took 1 point from the next 3 matches victories from Kye Steventon and George Clark gave us the 19 points we needed.  Added victories from Harry Anderson and Will Storr coupled with halves from Tom Benson and Matt McDonnell meant that the final score was 25-11 in our favour.

In the end it was a great team performance in which everyone contributed, the team ethic is improving every game and we look forward to a strong second half of the season.

Will Storr (19 points) extends his lead in the Player of the Year competition over Tom Duck (15) and George Clark (15). 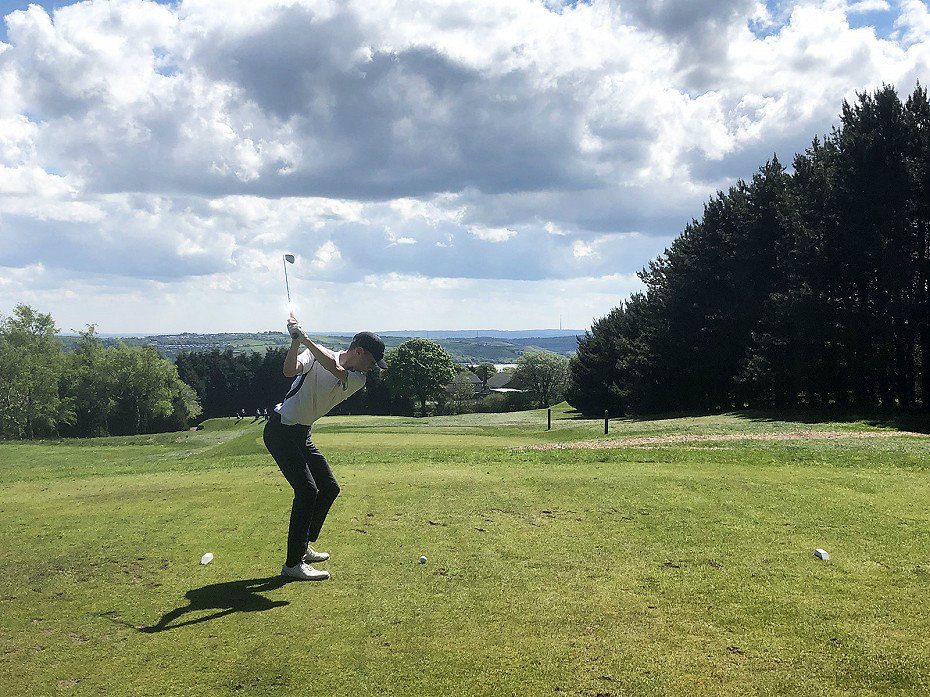 The East Riding under 18's headed to West End Golf Club looking to make amends after a loss last time out, this time versus last years champions, Halifax and Huddersfield.

The morning foursome produced some great golf from both teams with pretty much one sided matched all the way through. The Hull team of Jacob Hodgson and George Clark won 5&4, whilst debutant Harry Anderson and Tom Benson claimed a 3&2 victory.  Jake Sowden and Tommy Risker where 3 down with 4 to play and salvaged a half meaning the East Riding were 7-5 behind...not insurmountable.

Into the afternoon singles and the match was soon level as Captain Tom Duck claimed his second singles win of the year with a 4&3 victory.  It was a great start to the afternoon, but sadly one that would not last.  Halifax and Hudderfield won the next 3 matches giving them a firm hold on the tie.  Wins for Tommy Risker (5&4), Tom Benson (3&2) and Will Storr (3&2) gave the East Riding consolation points, but in the end a 23-13 scoreline favoured the home team.

Our next fixture is against Sheffield Union at Filey Golf Club on 2nd June...it would be great to see a big support for the first home game of the season. 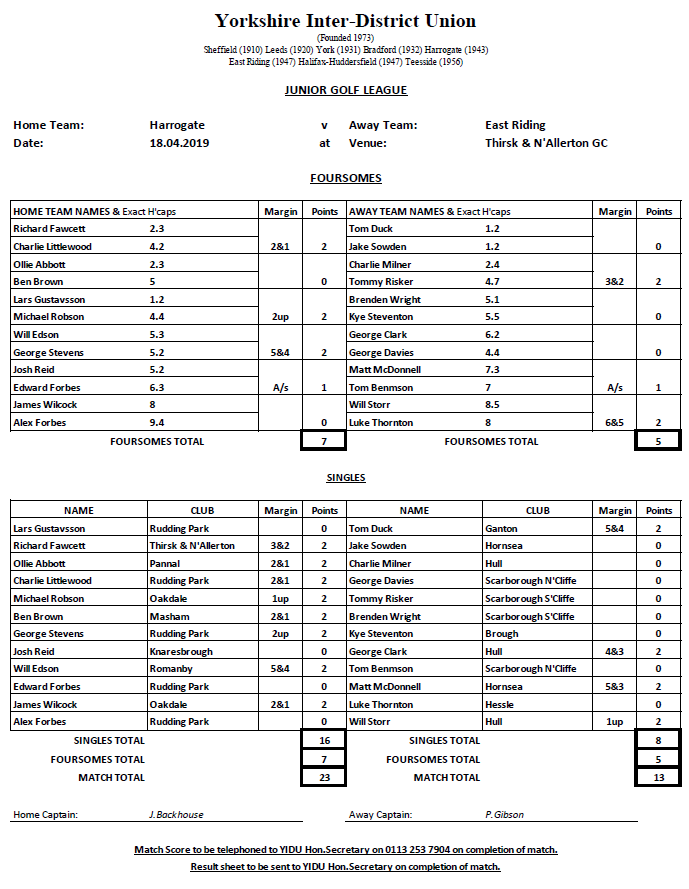 The under 18’s got their season started at Thirsk and Northallerton Golf club against a Harrogate team fresh from a win earlier in the week.

The East Riding team found themselves up against it early on with Harrogate flying out of the blocks to lead in the top 3 games. Captain Tom Duck and Jake Sowden fought valiantly, but could not haul in their opponents and lost 2&1. Charlie Milner and ?Tommy Risker also start slowly and found themselves 3 down, but an inspired back 9 led them to a 3&2 victory. Brendan Wright and Kye Steventon lost a close game 2 down, that could have gone either way and George Clark and George Davies finally lost their unbeaten record with a 5&4 defeat. The team rallied with Matt McDonnell and Tom Benson claiming half and Luke Thornton and last minute call up Will Storr claiming a fantastic 6&5 win. 7-5 at half way and the East Riding were still in it.

We needed a fast start in the afternoon and Captain Tom Duck led from the front and did exactly that with a comfortable 5&4 victory. The next 6 games all went the way of the home team with all but 1 reaching the 17th - Jake Sowden, George Davies, Charlie Milner, Kye Steventon, Brendan Wright and Tommy Risker were the guys that couldn’t quite bridge the gap on this occasion. Late wins for George Clark, Matt McDonnell and Will Storr, who was 3 down with 4 made the score respectable.

In the end it was a closer game than the score suggests with a lot of games going to the 17th or 18th hole, that on another day would have gone in our favour. We now look forward to our next match on Sunday 12th May against Halifax and Huddersfield.