On a warm sunny day with only a breath of wind, The Oaks Golf Club, with its generous fairways and light rough, was at the mercy of some of the finest players in Yorkshire in the final event of the 2019 season. And so it proved with scores of 66 from Tom Pyman (York), 67 from Sam Bridges (Halifax, Huddersfield) and 68s from Jack Ward (Harrogate), Charlie Daughtry (Sheffield), Ben Rhodes (Bradford) and our own Nick Raybould. He would go on to add a 71 to his morning score for a five under total and third place behind Ward (69,68) and Daughtry (70,68) in the individual contest.

Raybould was well supported in the morning by Leigh Gawley, who posted a three under score of 69, whilst the rest of the team, Tom Duck, Tom Broadley, Dan Swales and Dan Digby were a few shots over par with scores of 77, 78, 76 and 78 respectively. East Riding's lunchtime  total of 446 put us in fourth place, ten shots behind the midway leaders, Harrogate.

In the afternoon there was a marked improvement from Broadley, Swales and Digby with scores of 70, 73 and 72 respectively to go with Raybould's 71. However, Gawley slumped to an 81 whilst Duck, nursing an injured wrist sustained in a car crash two days earlier, could only manage a 79. The total for the afternoon rounds exactly matched the morning total giving an aggregate score of 892. Harrogate was the runaway winner on 864, which represented level par, whilst East Riding were placed fifth on countback.

The East Riding Team was supported by Howard Palmer, Steve Thornton, Peter Robertson and John Illingworth, the President having tendered his apologies before departing on holiday. 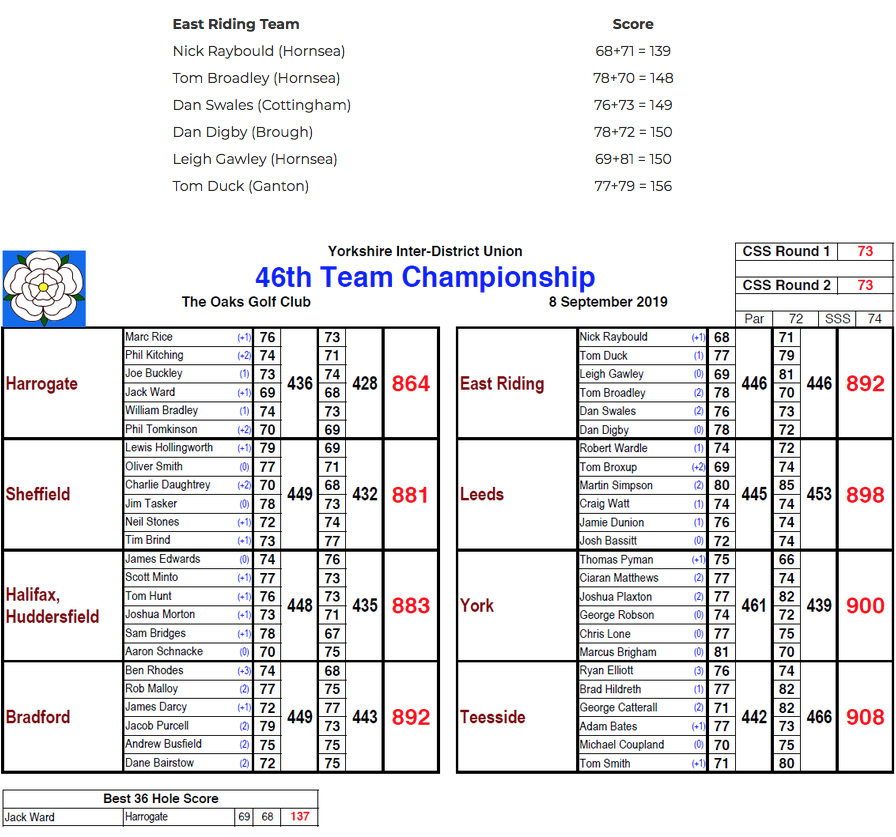