Results of the 2021 Team Championship

The first East Riding Union Championship since July 2019 brought a welcome return to competitive golf at district level. A full field of 24 teams had entered but the reality was that only a handful was to be the likely winner.

ERUGC Official Starter, Andy Pittaway, got the event underway at 07.30 in the presence of Hornsea GC Captain Tom Elder. First group out commenced under leaden skies with the portents of rain as Nick Raybould from the home club hit the first shot. He was followed by Burstwick Country Golf’s Rob Draper and Ryan Gray from Driffield GC.

After a prolonged dry, cold spell the course was subjected to 20mm of rain during Saturday and overnight rain could have threatened cancellation. Strangely the weather forecast was inaccurate and no further rain materialised, the event went ahead as planned although preferred lies were in operation. Many thanks to Gareth Williams and his team for turning out the course as well as they did given the lack of growth in the preceding weeks.

At the end of round one it was clear that the A.B. Care Trophy was either returning to holders Hessle or being handed to their chief protagonists, Hornsea.

Raybould returned a 71, brother Matt a 75 and Jack Maxey a 73 for a lunchtime leading score of 219. Only 2 shots back were Hessle with new recruit Stuart Easton 73, East Riding Past President, Andy Woodhead 72 and Lewis Blanchard 76. Indeed it could have been closer but for Easton taking 7 on the par 4 10th hole. After a flyer over the green resulted in an unplayable lie he was unfortunate to move his ball for a further penalty shot. On such fine margins are championships decided.

Other contenders couldn’t quite manage to put the pressure on as, Beverley & East Riding, Boothferry, Cottingham, Hornsea B, Hull and both Scarborough North Cliff teams had one poor score.

A brighter afternoon but with a freshening breeze saw round 2 commence just after noon. Reports from the course intimated that the Championship was on a knife edge and local supporters sought solace with refreshments from the clubhouse.

Hornsea’s afternoon efforts were six worse at 225 and when, further down the field, Easton produced a best of the day equalling, 71 a “grandstand” finish looked on the cards. Blanchard matched his morning round of 76 but, by his own admission, a tiring Woodhead slipped to a 79.

Hornsea clearly have the strength in depth with their B and C teams finishing third and fourth respectively. It was a pleasure to see a team from Filey, featuring a return to the amateur ranks by Fraser Kelley, who finished fifth with six solid cards. They are the hosts in 2022 which happens to be their 125th anniversary.

It was also great to see the return of Steve and Dave Raybould representing Scarborough North Cliff, not quite rolling back the years, but still getting the ball around very respectably. At the other end of the age spectrum, juniors Tommy Risker and Tom Benson impressed with (74 + 75 = 149) and (75 & 75 = 150) respectively for Scarborough North Cliff B.

In the end it was Hornsea’s day though and many congratulations to them with their fantastic score of 444. 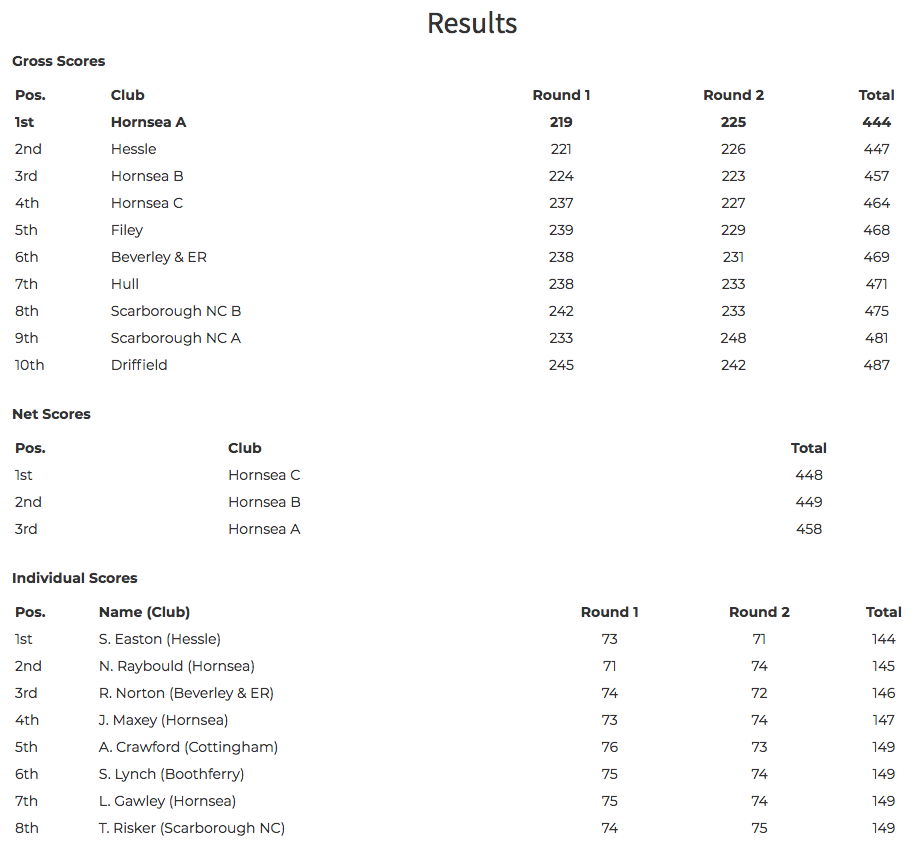