Results of the 2019 Open Championship

In a week of inclement weather it was a relief to see a bright sky when the first group teed it up in the 2019 East Riding Union Open Championship, played over 36 holes at the Bridlington Golf Club. Paul Westoby of Hainsworth Park was followed to the tee by Beverley & ER’s Peter Britt to be announced by ERUGC Offical Starter, Steve Robinson. As they said after their rounds, it was unlikely that they would win but it was a great event in which to be involved. 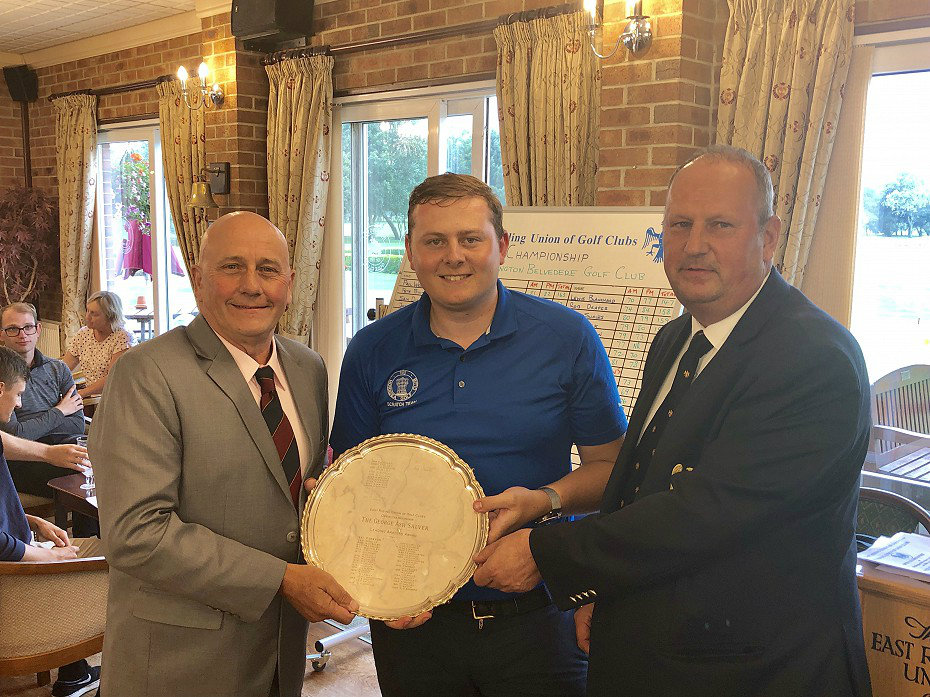 At the business end of the field, 10 professionals battled alongside some of the East Riding’s leading amateurs. Defending Champion, Beverley’s Richard Pace was out in the last group with fellow professional Paul Mayoh and Scarborough North Cliff’s Simon Boddy. They were preceded by Burstwick professional Matt Daley and Hornsea’s Nick Raybould. Nick, fresh from winning the Yorkshire Team Championship with brother Matt and Luke Robinson, looked to be the favourite on a course he knew well.

It was also pleasing to see in the field the talented Ryan Gray, from Driffield and Hessle’s Lewis Blanchard. Missing were Amateur Champion, Steve Lynch due to holiday commitments and Hessle’s Andy Woodhead and Alan Wright and Beverley’s Richard Norton who had all qualified for the British Seniors Amateur Championship at North Berwick. Other absences were more difficult to explain.

At lunch, Hainsworth’s Mayoh led by a single stroke after a 3 under 69 which featured a meagre 32 shots coming home. A satisfied Gray and disappointed Blanchard followed on 70, the latter being 5 under standing on the 14th tee. Also in close proximity were Hessle Pro James Woodhead, Raybould and Boddy on 72. Pace and Daley were a further shot adrift.

Round 2 started nearly an hour ahead of schedule.

Some of the leaders started to fall away in the freshening afternoon breeze but Gray held it together well and posted a 2 round total of 144 which led for the best part of two hours. The final denouement, however, was to be delayed as first Daley and Raybould and then Mayoh all posted 142. Daley courtesy of an outward half 31 in his 69, Raybould a solid 70 and Mayoh, a battling 73 which featured a thrilling 3 wood to the last which flirted with the adjacent out of bounds.

The organising committee decided that the par 4 first and the tricky par 3, 9th should be the playoff holes. All three participants made a steady par to start before heading through a gathering crowd to the 226 yard 9th. Mayoh and Daley’s tee shots  finished right, whilst Raybould sneaked his approach on to the front edge. From there he rolled his putt stone dead and watched as his rivals both failed to get up and down to match him. A great week had just got better for the likeable Bridlington resident who took home both the Needler Trophy as Open Champion and George Ash Salver as leading amateur.

The Presentation was made by ERUGC President, Chris Clarkson and Bridlington Vice Captain, Graham Holgate. Huge thanks to Anthony Howarth and his team at the club who were all helpful, courteous and efficient.

The ERUGC Open will be held at Burstwick Country Golf in 2020.