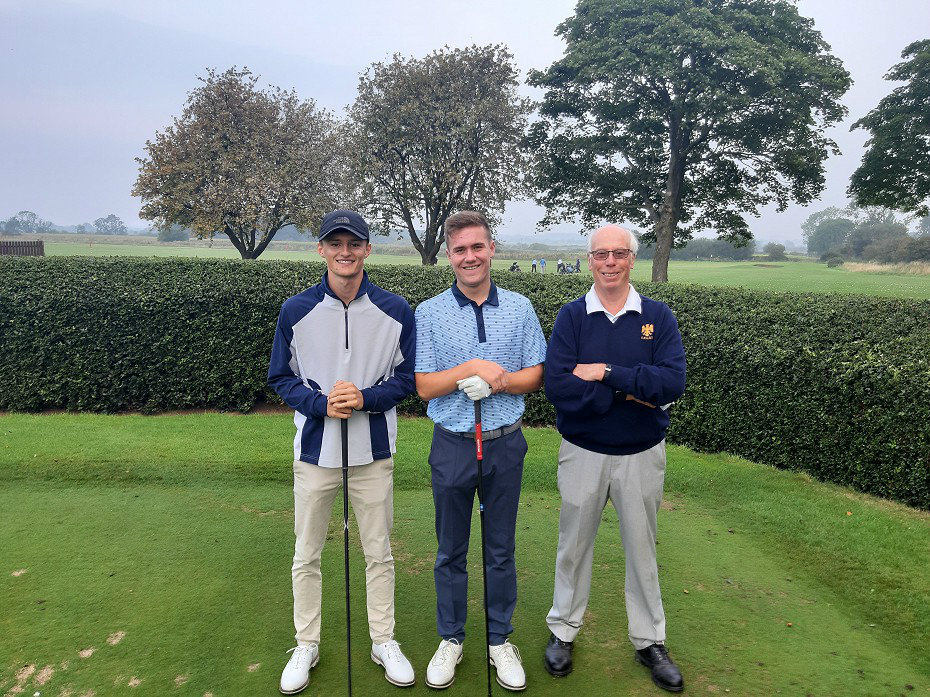 The weather and Ganton course were in perfect conditions when the 36 hole match started at 8-30.

Opening drives from both player missed the fairway, Tommy’s ball finding the left rough and Ryan’s the right. Both players found the green and holed out for a half. It was the 9th before they halved another hole. Ryan dropped a shot at the 2nd to lose the hole but birdied the 3rd to level the match.  Tommy birdied the 4th to regain the lead and went further ahead when Ryan 3 putted at the par 3 fifth hole. The tough 448 yard 6th went in Tommy’s favour, Ryan bunkered his second shot to the green and failed to match Tommy’s par 4. Ryan’s wayward driving cost again at the 7th, from a difficult lie he found more trouble to the right of the green when he had to take a penalty drop and subsequently conceded the hole leaving Tommy 4 up. At this stage things looked ominous for Ryan, Tommy was playing a faultless game with Ryan struggling to find fairways off the tee. However, on the 8th Tommy blocked his drive right into the deep gorse and he had to take a penalty shot which eventually cost him the hole. Both players birdied the 9th making the match in Tommy’s favour by 3 holes. Birdies on the 10th and 11th took Tommy further ahead and after the 12th he had a commanding 5 hole lead.

The 13th hole saw a change in fortune and momentum from Ryan, after hitting two shots with his trusty 2 iron onto the green at this 535 yard hole he then holed his 20 yard putt for an eagle 3. This seemed to un-nerve Tommy and his accuracy off the tee changed, he uncharacteristically blocked drives at 14th and 15th, on both occasions the ball was lost and so the hole reducing his lead to 2 holes. The 16th proved equally troubling when Tommy’s drive hit a tree to the right of the fairway and not seen again, so another concession and his lead down to 1.A bogey 4 for Tommy at the tough par 3 17th saw the match back to all square. Two 4’s from both players on the 18th left the match all square and hanging in the balance.

The second round began with Ryan hitting a magnificent drive well over 300 yards leaving him just a short pitch to the green, Tommy’s opening drive left him some 200 yards from the green but he did manage to recover to achieve a par which Ryan could only match. The 2nd proved to be troublesome for Ryan yet again when his bogey 5 gifted the hole to Tommy. Whilst playing the 3rd the forecasted rain hit, in a very short time the 3rd green was beginning to flood and it was touch and go if play could continue. The deluge did relent and the flooded greens soon cleared.

The heavy rain seemed to affect Tommy more than Ryan when Tommy had to concede the 3rd hole after visiting two bunkers. Both players birdied the 4th and parred the 5th, so all square at this stage. Tommy went ahead at the 6th when Ryan bunkered his shot to the green. By now Ryan had regained confidence with his driver and on the 7th his fairway splitting, 300+ yards drive left him with a short chip to the green, whilst Tommy was trying to recover from a poor drive which found him in the deep rough. The 8th and 9th holes were halved leaving the match all square after 27 holes.

The 10th hole saw Ryan take the lead for the first time in the match when he holed his 20 foot for birdie. Pars for both on the 11th & 12th meant the match was still just one hole in Ryan’s favour. The 13th hole proved again to be pivotal in this match, with both players finding the fairway, Ryan was first to play, his 3 wood shot to the green set off way right towards the deep punishing gorse, Tommy’s shot left him on the fairway some 100 yards short of the green. Ryan’s ball was found and he proceeded to hit magnificent shot to the green leaving him some 25 foot from the pin which he then holed for a birdie, when Tommy failed to hole his birdie attempt Ryan was two up. A bunkered tee shot from Tommy down the long 15th cost him another hole and consequently 3 down and dormy in the match. A half in four down the 16th left Ryan the winner by a margin of 3&2.