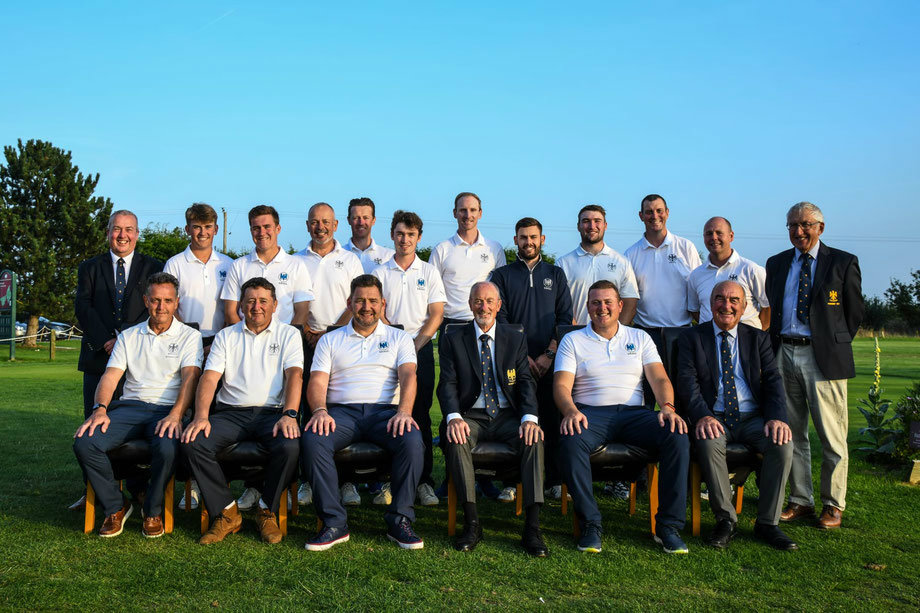 In a closely contested season, the ERU Men's Team have finished top of the league table for the first time since 2009. Their final day win over Bradford resulted in euphoric scenes in and around the Burstwick clubhouse as the team and its supporters celebrated the achievement.

East Riding went into the final match knowing that a win would secure the title unless Halifax Huddersfield won their match against Harrogate by a landslide. Both teams had won four games and halved their head-to-head three weeks earlier, with just one loss apiece. Sheffield were in with a shout to win the title, should the top two stumble and even Bradford had an outside chance. So a win was imperative and Captain Andy Lockwood's rousing pre-match briefing will long be remembered by those present!

The team saw the return of Alan Wright, making his 201st appearance, paired in the foursomes with Mark Lamb (only 93 appearances) as they ran out 4&3 winners. At the other end of the age scale were Tommy Risker and Will Storr from the Under 18s squad securing a final hole win , whilst Nick Raybould, making his last appearance before turning pro, and Jamie Gregory romped home by 7&6. The other three games were lost by narrow margins, leaving the teams tied at lunch.

As the afternoon wore on, the mood of the watching supporters changed from relaxed to nervous, then back to relaxed and finally to confident. The top three singles were all closely contested with the result of each being in the balance until late in the game. Bradford were eventually to take an overall lead with Raybould and Aaron Brettell both losing 3&2 whilst Steve Uzzell won by 2&1.

Gregory at number 4 looked to be well in control at 3up through 11 but was taken to the last to provide yet more nervous tension for his Captain. At this point, the scores were level but then the floodgates opened and it became a question as to who would win the all-important 19th point.

Games 5 to 8 all fell to East Riding. Lewis Nicholls, another veteran with 94 appearances, won by 5&4 whilst Risker needed one more hole to secure his victory. Wins for Andy Woodhead (2&1) and Wright (3&2) took the team to 18 points.

When Will Storr stepped onto the 16th tee 3 up with 3 to play, the win was assured and he would go on to close out his match 3&1. Attention then turned to what was happening on the far side of the county and when the result of the Halifax v Harrogate match came through at 24:12, the league title was won.

What a season! From the disappointment of the narrow loss in the opening match against Sheffield, through the afternoon fightbacks against Leeds and Harrogate and the nerve-jangling tie with Halifax/Huddersfield, this team of 27 players and its non-playing Captain, Andy Lockwood  have done the Union proud.

Steve Uzzell is Player of the year with 37 points. Jack Maxey & Leigh Gawley tied for second place with 28 points, Tommy Risker, Steve Lynch & Lewis Nicholls have 27 and Jamie Gregory has 26.

All photos of the last match were provided by Bellsa Photography