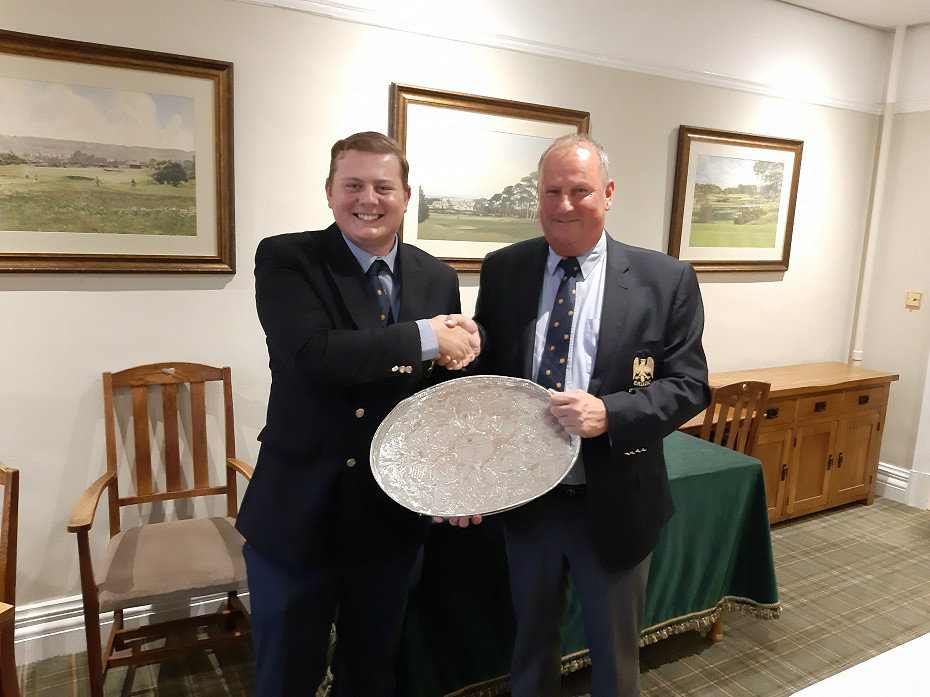 The East Riding Union of Golf Clubs’ Matchplay Championship final was played at the Ganton Golf Club on Sunday 15th September 2019. Conditions were cool with a northerly breeze when the match between East Riding veteran Alan Wright, defending Champion, of Hessle and East Riding’s in-form player Nick Raybould of Hornsea teed off.

Alan took an early lead at the 1st hole with a par 4 when Nick failed to get down in two from the edge of the green. After halving the 2nd Nick levelled the match on the 3rd with a 4 after Alan had driven into one of Ganton’s huge bunkers.  Alan was in more trouble down the 4th and Nick capitalised on this and went one up with a par 4. Both players achieved par three’s at the 5th.On the 6th Nick hit a prodigious, drive well over 300 yards, leaving him only a wedge into this par 5 hole although he pulled his 2nd shot into a green-side bunker he hit a magnificent bunker shot to within 2 foot and record a birdie to take him to 2 up.

Down the 8th Alan got his driving back on track whilst Nick’s drive ended up in deep rough, although Nick hit a great recovery shot, he ended up in a greenside bunker and went on to lose this hole. The 9th saw both players hit long and straight drives, Nick hit a great 5 iron to within 20 foot of the pin but Alan’s response was a magnificent 7 iron to within 2 feet which was conceded for his eagle to return the match to all square after 9 holes.

The par three 169 yard 10th saw Alan’s 9 iron finish 5 foot from the hole but when he failed to hole-out for his birdie the hole was halved.

The 15th saw both players hit 300 yard fairway splitting drives but Nick took the advantage hitting a wedge to within 15 foot to record his par whilst Alan 3 putted to go 3 holes behind. On the 16th both players were in the same green-side bunker for two shots, Alan made a great bunker shot and holed his putt for par he reduced the deficit to two holes. So it remained until Nick holed out for birdie at the 18th to give him a 3 shot lead after the first 18 holes.

When Nick birdied the 1st hole of the second round it looked as if the game was all but over but the 2nd hole saw Alan fight back begin when he won the 2nd with a par 4. The 4th hole also went Alan’s way when Nick’s putter badly let him down with him three putting from no more than 6 foot. Nick’s putting touch returned on the 5th when he hold from 10 foot for birdie taking him back to 3 up.

Alan’s fighting spirit then saw him get the game back to all-square over the next three holes when he returned: an eagle, par and birdie over the next three holes. The 9th & 10th saw each of the players securing wins with pars. On the 11th Alan had an enormous piece of luck when his drive hit a rake which prevented the ball going into a deep fairway bunker, taking advantage of this and secured a half in par. On the 12th hole Alan’s luck ran out when he found deep rough with his drive gifting the hole to Nick. The 13th was halved in par then both players struggled at the short 14th hole with Alan’s scrappy bogey 5 winning the hole to make the match all-square again. The 15th saw Alan have more bunker trouble and he had to concede the hole to put Nick back in the driving seat.

After a wayward drive by Alan at the long par 4 - 16th hole the game looked to be heading back to Nick’s favour but a magnificent ‘Ballesteros’ type shot from the trees enabled Alan to secure a par 4 and win the hole when Nick missed a short putt. Back to all-square.

The drama continued. Nick birdied the par four 17th to go 1 up again and when Alan bunkered his second shot on the 18th the game looked to be all over but not to be. Nick had hit the green in two, albeit some 40 foot away, Alan then proceeded to hit his bunker shot to within 10 foot of the pin and then managed to hole out for his par.  When Nick missed an 8 footer to win the game it was all square after 36 holes and so the game went to sudden death.

The 37th hole saw Alan take driver from the tee but his slightly pushed tee shot saw him impeded by one of Ganton’s many gorse bushes. In the meantime Nick had played iron for safety which certainly paid off when he managed to secured his par to win the hole, the match and title East Riding Union of Golf Club’s Match-play Champion for 2019.

At the after match-dinner the President, Mr. Chris Clarkson presented Nick Raybould the Trophy.